For background, see our first post about this scam and our follow-up article.

Last week someone blasted out a massive email campaign touting shares of OTC Rainbow International Corp (RNBI) penny stocks. RNBI has been the subject of these scams before, and the spammers may have cried wolf once too often. This time it mostly fizzled out. The share price actually went down during the pump.

What is a Pump and Dump Scam?

It's an attempt to profit from misleading news about a stock's value. It often involves cheap "penny stocks" (under $5) that are traded over-the-counter. Reliable news about penny stock companies is hard to come by, so rumors can take hold quickly, making their stock prices easy to manipulate.

The "Pump": Someone who owns many shares of a certain stock tries to inflate the price artificially by spreading fake positive news about the company. Gullible investors quickly buy, pushing prices way above normal. But it doesn't last long.

The "Dump": The scammers quickly sell off their shares at the higher price, making a huge profit. The price plummets in response, leaving victims holding shares of a near-worthless stock that are hard to sell.

Our 24/7/365 spam review team caught the first wave of this new pump and dump scam about two weeks ago and immediately blocked it, protecting our customers from millions of dangerous emails. Apparently, we were among the first to report this campaign and continued to block it as it morphed over the coming days.

A lot of people were searching for information about RNBI, pump and dump, etc. Our first article about the spam campaign was hit so hard, traffic to our website surged to more than 10 times normal traffic volumes.

Because this was such big news among the penny stocks crowd, we decided to follow up with an analysis of what happened.

This company has been the subject of these scams before, as recently as last May.

According to reports, email servers were hit with positive news about RNBI just before the opening bell on May 14, 2014. Trading volumes, often well below 1 million, jumped to more than 8 million during the day.

Then came the dump. Over the next two trading days, the price dropped about 35% after the scammers apparently dumped their shares, netting a handsome profit. Those who were caught unaware were left holding the bag at about $0.18, closer to its normal price. 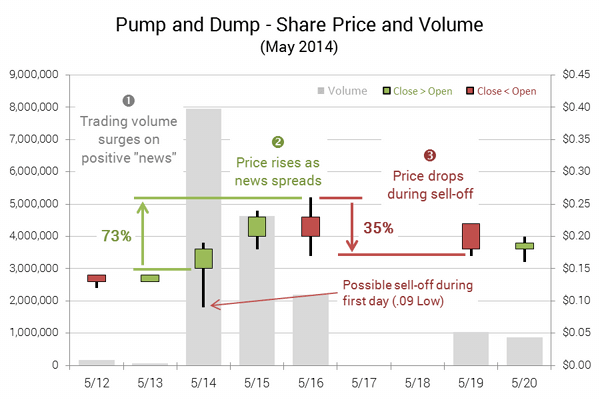 The most recent campaign didn't work out so well. News went out quickly on Friday when it started. After a quick minor price increase, the stock price actually went down during the remaining days of the rather long "pump".

The wave of emails was massive and grew from Friday through the following Tuesday. We blocked it within moments on day one, protecting our customers from millions of these potentially damaging messages. 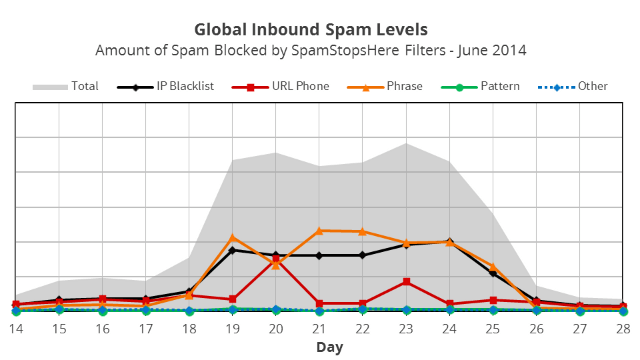 The "Pump", a massive wave of spam, continued for nearly a week.

Because we profile spam based on many different characteristics, we can often predict what it will look like next; easily keeping up with the tricks that spammers use to get past other anti-spam programs. And that's what happened. The following week the messages morphed at least once a day with different text and images, and we blocked every variation that we saw.

We also blogged about it on the first day, along with many others. Maybe because people are more aware of these scams, or maybe because of the flood of news coverage, the share price only fluctuated between 0.21 and 0.24 the first day.

But this extended "pump" didn't work. As the fake news (and warnings) spread after the weekend (and traffic to our blog exploded), the share price went down during the pump to below 0.20, less that its starting value. It also appears that fewer people were taken in this time. The much lower trading volume indicates there wasn't nearly as much buying or selling, despite the massive spam email campaign to pump up the stock. 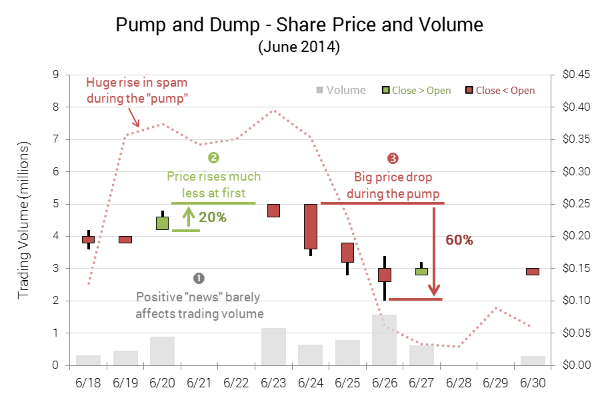 How Do We Block Spam So Well?

Unlike many antispam providers, we have a team of live threat analysts in our U.S. headquarters who update our database every two minutes, 24/7/365, to keep up with new threats. They can identify spam like this campaign very quickly and block it. Instead of relying solely on blocking "click-me" links or Bayesian Heuristics, we have additional filters to ensure that sophisticated spam campaigns like this are blocked.

SpamStopsHere works differently from other anti-spam programs. It blocks 99.5% of spam while delivering over 99.999% of legitimate emails. That means we block fewer that 1 out of 100,000 good emails, which is why businesses and professionals love our service.

Our spam review team, along with our proprietary Spamalyzer 3.0, analyzes and blocks email threats for our customers 24/7/365. That's a claim almost no other antispam provider can make.

The mark "Cialis" is the property of its owner. This article is for informational purposes. No endorsement by third parties is implied and none should be inferred.